APPLY FOR A BOOTHBecome a Sponsor

This fact sheet provides exhibitors with the information necessary for the initial planning of aircraft displays at HAI HELI-EXPO 2021 at the New Orleans Ernest N. Morial Convention Center (ENMCC). Helicopter Association International (HAI) will provide additional guidance through the HAI HELI-EXPO 2021 Exhibiting Aircraft & Flight Operations Guidelines / Pilot Safety Handbook, which is scheduled for release in the fall of 2020.

The following documentation will be required for all aircraft that will be displayed as part of HAI HELI-EXPO 2021, including those flying in and those that will be trucked or trailered in. Any aircraft lacking the documentation described below, including proper proof of insurance, will not be allowed to land at the ENMCC, enter the ENMCC, or remain parked on ENMCC property:

The ENMCC is a large facility, and HAI HELI-EXPO 2021 will occupy all halls. As such, it is important that flight crews and exhibitors know in which hall their aircraft will be displayed. If you’re uncertain about which exhibit hall you’ll be in, ask your company’s HAI HELI-EXPO 2021 exhibitor contact.

It’s possible that certain helicopters may require the removal of one or more blades to fit through the ENMCC access door. If you believe your aircraft may need to be debladed, please advise HAI’s Flight Operations staff:

HAI staff will work closely with you to ensure the smooth and efficient transit of your aircraft into the exhibit hall.

All helicopters flying to the ENMCC will be pre-staged from Flightline First, an FBO located at New Orleans Lakefront Airport (KNEW). Note: the ENMCC is located approximately 8 nautical miles south of KNEW.

HAI has confirmed that Flightline First has ample ramp space available to accommodate the parking of a large number of helicopters. Exhibitors should make early arrangements with Flightline First for servicing, overnight parking, and preparation of display aircraft for HAI HELI-EXPO 2021. 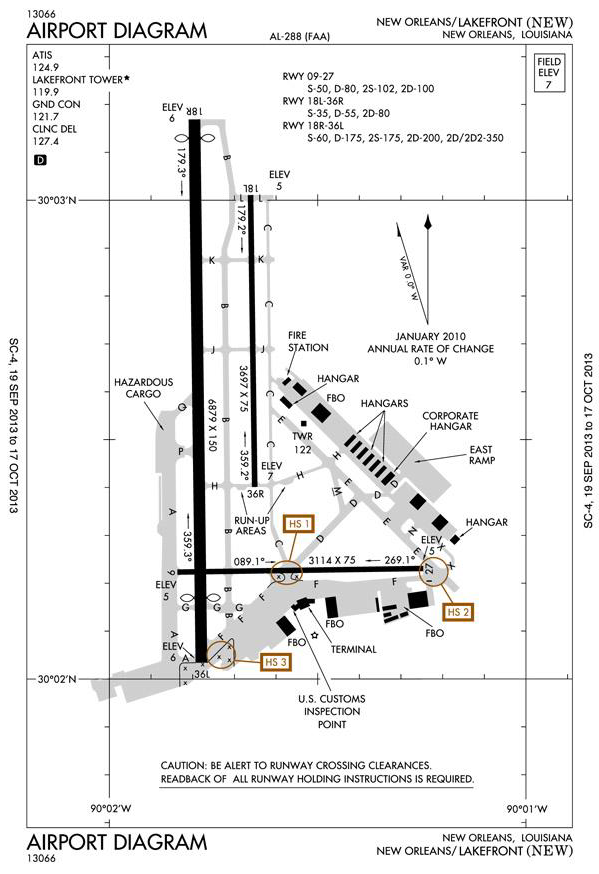 Any exhibitor flying aircraft with experimental or restricted-category airworthiness certificates must comply with FAA requirements regarding flight of those aircraft over congested areas. Flight operations involving these aircraft categories must be coordinated with the Baton Rouge FAA Flight Standards District Office (FSDO). The process for gaining FAA approval for such flights should be initiated well in advance of HAI HELI-EXPO 2021.

Attendance at an HAI HELI-EXPO 2021 pilot safety briefing is required for ALL pilots before they can land an aircraft at the ENMCC or take off from that location. Pilot safety briefings will be held at the ENMCC at 8:00 am on both fly-in days, Friday, March 19, and Saturday, March 20, 2021. Refer to the HAI HELI-EXPO 2021 Exhibiting Aircraft & Flight Operations Guidelines / Pilot Safety Handbook for more detailed information.

Aircraft intended for display at HAI HELI-EXPO 2021 can be flown, trucked, or trailered to the ENMCC. However, aircraft are required to use the same method for both arrival and departure. Once an aircraft has been towed into the ENMCC, it will not be permitted to depart from the ENMCC until after the conclusion of the show at 4:00 pm, Thursday, March 25, 2021.

Flown-In Aircraft. Flight routes and procedures for aircraft being flown to HAI HELI-EXPO 2021 have been developed by HAI, the Baton Rouge FSDO, and the Lakefront Airport ATC and will be published prior to the show. All aircraft flying to the ENMCC will be assigned a fly-in date and time slot for arrival.

All departure, en route, and arrival procedures, frequencies, and appropriate transponder codes will be briefed in detail by FAA ATC personnel at the pilot safety briefings described in the “Pilot Briefings” section above.

Trucked or Trailered Aircraft. Questions relating to aircraft being trucked or trailered to the ENMCC should be directed to the Global Experience Specialists (GES) point of contact:

No aircraft will depart the ENMCC until the conclusion of the show at 4:00 pm, Thursday, March 25, 2021. The order of departure for all aircraft is at the discretion of the HAI Flight Operations staff. Aircraft are required to use the same method for departure as arrival. Only flown-in aircraft will be permitted to fly out.

Flown-In Aircraft. The City of New Orleans Fire and Rescue requires that aircraft being flown to the ENMCC for display at HAI HELI-EXPO 2021 are to arrive at the ENMCC with “minimum fuel,” which is defined as the amount of usable fuel on board the aircraft that meets ALL of the following requirements:

Aircraft fuel quantity may be checked prior to movement into the ENMCC. Pilots are reminded to plan their departures from HAI HELI-EXPO 2021 back to the FBO at Lakefront Airport, where necessary refueling can be done. No fueling or defueling will be permitted at the ENMCC or its facilities.

Trucked or Trailered Aircraft. For aircraft being trucked or trailered to the ENMCC, the New Orleans Fire Marshal’s Office requires that these aircraft arrive with no fuel and that their fuel systems be purged prior to aircraft arrival at the ENMCC.  No fueling or defueling will be permitted at the ENMCC or its facilities.

Ground-Handling Personnel, Towing, and Maintenance Equipment:
All aircraft will be towed by AEM, HAI’s towing contractor, from the landing area into the appropriate hall in the ENMCC. No hand-pushing of aircraft will be allowed.

Exhibitors are required to provide ground-handling wheels, tow bars, or any special towing equipment, as well as any personnel required to assist in the ground movement of their helicopter(s) into and out of the exhibit halls.

It’s the responsibility of the exhibitor and/or aircraft owner to ensure that the necessary tools and qualified personnel are available to conduct any maintenance on their aircraft. Be prepared to remove any externally installed accessories/equipment that may interfere with the installation of the tow bar.

If you require other on-site equipment during move-in or move-out, including cranes or forklifts, refer to your Exhibitor Services Kit and contact the GES on-site representative:

HAI makes no guarantees about its ability to accommodate late arrivals. If you believe your aircraft will be unable to reach the ENMCC during its scheduled arrival time, contact the HAI Flight Operations staff:

Any cookies that may not be particularly necessary for the website to function and is used specifically to collect user personal data via analytics, ads, other embedded contents are termed as non-necessary cookies. It is mandatory to procure user consent prior to running these cookies on your website.